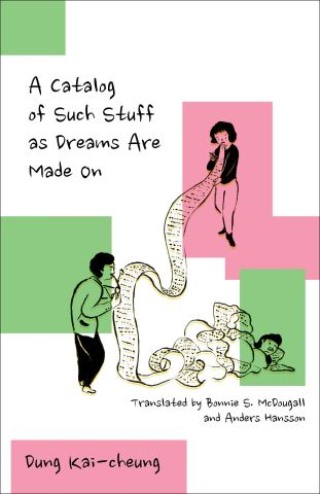 A Catalog of Such Stuff as Dreams Are Made On

Dung Kai-cheung’s A Catalog of Such Stuff as Dreams Are Made On is a playful and imaginative glimpse into the consumerist dreamscape of late-nineties Hong Kong. First published in 1999, it comprises ninety-nine sketches of life just after the handover of the former British colony to China. Each of these stories in miniature begins from a piece of ephemera, usually consumer products or pop culture phenomena, and develops alternately comic and poignant snapshots of urban life.

Dung’s sketches center on once-trendy items that evoke the world at the turn of the millennium, such as Hello Kitty, Final Fantasy VIII, a Windows 98 disk, a clamshell mobile phone, Air Jordans, and cargo shorts. The protagonist of each piece, typically a young woman, is struck by an odd, even overriding obsession with an object or fad. Characters embark on brief dalliances or relationships lasting no longer than the fashions that sparked them. Dung blends vivid everyday details—Portuguese egg tarts, Japanese TV shows, the Hong Kong subway—with situations that are often fantastical or preposterous. This catalog of vanished products illuminates how people use objects to define and even invent their own selves. A major work from one of Hong Kong’s most gifted and original writers, Dung’s archaeology of the end of the twentieth century speaks to perennial questions about consumerism, nostalgia, and identity.

Dung Kai-cheung was born in Hong Kong in 1967 and teaches writing at the Chinese University of Hong Kong. He has published more than twenty books in Chinese, mainly novels and short stories. His works in English translation include Atlas: The Archeology of an Imaginary City (Columbia, 2012), translated by Bonnie S. McDougall and Anders Hansson with the author, and The History of the Adventures of Vivi and Vera (2018).

Bonnie S. McDougall is honorary professor of Chinese at the University of Sydney and has translated works by writers including Bei Dao and Ah Cheng.

Anders Hansson is the author of Chinese Outcasts: Discrimination and Emancipation in Late Imperial China (1996).