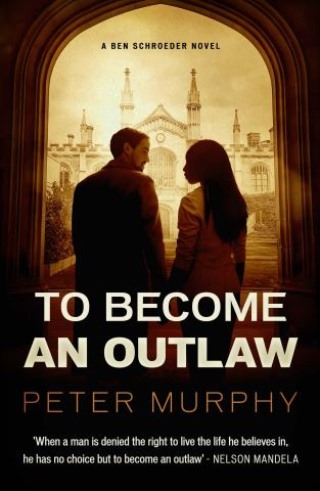 To Become An Outlaw

'When a man is denied the right to live the life he believes in, he has no choice but to become an outlaw' - Nelson Mandela

1964, Apartheid South Africa. Danie du Plessis, the son of a conservative Afrikaner family, is poised to start a glittering legal academic career at one of South Africa's leading universities, when he falls in love with a student, Amy Coetzee. But there's a problem: he's white, she's not. Facing arrest, imprisonment and ruin, the couple flee South Africa, and settle in Cambridge, where friends find them positions at the University. They marry and have two children, and have seemingly put the past, and South Africa, behind them. But in 1968 Art Pienaar enters their lives, and, insisting that they have a duty to fight back, enlists their help in increasingly dangerous schemes to undermine the South African regime.

When Pienaar and a notorious drug dealer, Vince Cummings, are found murdered together, Danie's activities come to light, and he and his family find themselves in mortal danger. Danie is also threatened with criminal prosecution on behalf of a government desperate to maintain good relations with the apartheid regime. Danie knows he's sailed close to the wind. But has he become an outlaw? Can Ben Schroeder persuade a jury that the answer is no?

Peter Murphy: Peter Murphy graduated from Cambridge University and spent a career in the law, as an advocate, teacher, and judge. He has worked both in England and the United States, and served for several years as counsel at the Yugoslavian War Crimes Tribunal in The Hague. He has written and published eleven novels, including eight historical/legal thrillers featuring Ben Schroeder. His latest series features Judge Walden in three collections of legal cases.