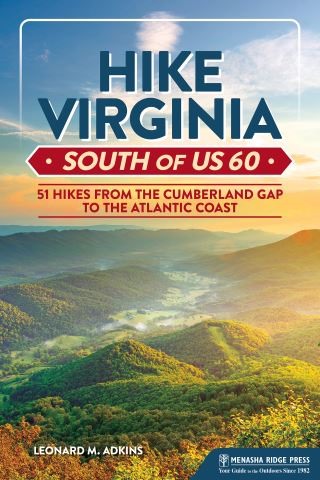 Hike Virginia South of US 60

51 Hikes from the Cumberland Gap to the Atlantic Coast

Leonard M. Adkins has logged more than 20,000 miles hiking the world’s backcountry. Each hiking season finds him on some new adventure. He has hiked the entire Appalachian Trail five times; traversed the Continental Divide Trail from Canada to Mexico; followed the full Pacific Northwest Trail through Montana, Idaho, and Washington; and walked several hundred miles upon Canada’s Great Divide Trail. He has also trekked the full length of the Pyrenees High Route from the Atlantic to the Mediterranean and has explored Iceland’s interior. With his wife, Laurie, he hiked West Virginia’s Allegheny Trail, the Ozark Highlands Trail in Arkansas, and the Mid-Atlantic’s Tuscarora Trail. Together, they tramped New Zealand’s Milford Track and a number of the country’s other Great Walks. And, of course, he has hiked every one of the trails in this book—along with many other pathways to determine which ones were the best to include. In addition, he walked each of these routes with a surveyor’s measuring wheel to ensure the accuracy of the mileage and the description.

Leonard is the author of more than 20 books and over 200 articles on the outdoors, nature, and travel and is the walking columnist for Blue Ridge Country magazine. His writing has received numerous awards including the National Outdoor Book Award and SATW Foundation’s Lowell Thomas Travel Journalism Award. He has also been a Ridge Runner and a Natural Heritage Monitor for the Appalachian Trail Conservancy, helping to observe and protect rare and endangered plants, and he has been on the boards of directors of two Appalachian Trail maintaining clubs. He and his wife live in North Chesterfield, Virginia.