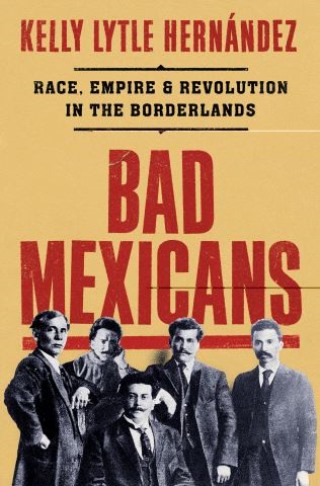 Bad Mexicans: Race, Empire, and Revolution in the Borderlands

“Rebel historian” Kelly Lytle Hernández reframes our understanding of U.S. history in this groundbreaking narrative of revolution in the borderlands.

Bad Mexicans tells the dramatic story of the magonistas, the migrant rebels who sparked the 1910 Mexican Revolution from the United States. Led by a brilliant but ill-tempered radical named Ricardo Flores Magón, the magonistas were a motley band of journalists, miners, migrant workers, and more, who organized thousands of Mexican workers—and American dissidents—to their cause. Determined to oust Mexico’s dictator, Porfirio Díaz, who encouraged the plunder of his country by U.S. imperialists such as Guggenheim and Rockefeller, the rebels had to outrun and outsmart the swarm of U. S. authorities vested in protecting the Diaz regime. The U.S. Departments of War, State, Treasury, and Justice as well as police, sheriffs, and spies, hunted the magonistas across the country. Capturing Ricardo Flores Magón was one of the FBI’s first cases.

But the magonistas persevered. They lived in hiding, wrote in secret code, and launched armed raids into Mexico until they ignited the world’s first social revolution of the twentieth century.

Taking readers to the frontlines of the magonista uprising and the counterinsurgency campaign that failed to stop them, Kelly Lytle Hernández puts the magonista revolt at the heart of U.S. history. Long ignored by textbooks, the magonistas threatened to undo the rise of Anglo-American power, on both sides of the border, and inspired a revolution that gave birth to the Mexican-American population, making the magonistas’ story integral to modern American life.

Kelly Lytle Hernández: Kelly Lytle Hernández holds the Thomas E. Lifka Endowed Chair in History and directs the Ralph J. Bunche Center for African American Studies at UCLA. A 2019 MacArthur “Genius” Grant recipient, she is the author of the award-winning books Migra! and City of Inmates. She lives in Los Angeles, California.