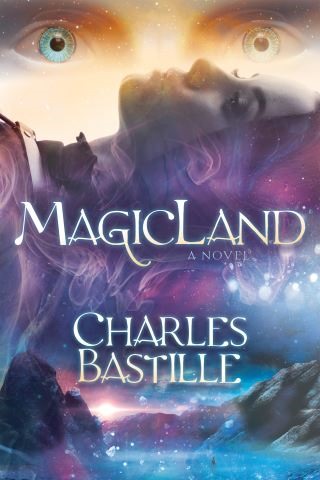 On a future Earth where magic and technology have been at war for two thousand years, can one kiss change the fate of the world?

When a young actor from Gath, Belex, crash lands outside the magic land known as Moria, he’s rescued by a young Morian priestess in waiting, Aurilena. The two find themselves drawn impossibly towards each other in the midst of a war between two distinct species of humanoids: her people, the magicians of Moria, and his people, the Gath, whose tremendous intellectual and physical capabilities are programmed into their DNA.

Together, the two discover a terrible secret that lies at the heart of the centuries-old conflict between MagicLand and Gath. It’s a secret that leads to a kiss that could end the war once and for all. The only question is will it end in brutal violence or give way to an improbable peace between implacable enemies? The answer to that question may depend on whether Aurilena can discover the true source of power behind her unique gifts before it’s too late.

Charles Bastille: Charles Bastille wrote and self-published his first major works when he was in sixth grade. Using notebook paper, he created palm-sized comic booklets, The Adventures of Dr. Maums, which circulated around several classrooms. He has been writing fiction ever since. Most of his fiction has been stored away, as he worked day jobs, first in the advertising industry as a creative director and later as a software engineer. Charles has published several software development books for publishers such as Sybex, IDG, and Wiley and was a co-author of the industry classic HTML, XHTML, and CSS Bible. MagicLand is Charles’ debut novel. He currently lives in Atlanta, Georgia.