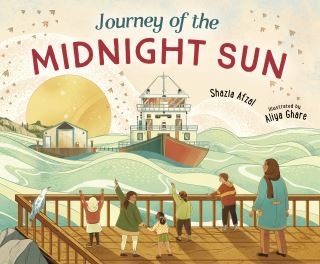 Journey of the Midnight Sun

This is the true story of the journey of the Midnight Sun Mosque.

In 2010 a Winnipeg-based charity raised funds to build and ship a mosque to Inuvik, one of the most northern towns in Canada’s Arctic. A small but growing Muslim community there had been using a cramped trailer for their services, but there just wasn't enough space. The mosque travelled over 4,000 kilometers on a journey fraught with poor weather, incomplete bridges, narrow roads, low traffic wires and a deadline to get on the last barge heading up the Mackenzie River before the first winter freeze. But it made it just in time and is now one of the most northern mosques in the world.

This beautiful picture book reminds us that the collective dream of fostering a multicultural and tolerant Canada exists and that people of all backgrounds will come together to build bridges and overcome obstacles for the greater good of their neighbors.

Shazia Afzal has been a teacher and storyteller for over twenty years. Having immigrated to Canada in 2002, Shazia sought to live near her community mosque with every move. Because of her firsthand understanding of the challenges Muslim families face in new communities, the incredible story behind the construction and transportation of the Midnight Sun Mosque resonated with Shazia. She felt compelled to share the story with children who may not have heard of its epic adventure and to remind young readers that it is a blessing to live in a country where people are free to practice their faith. Shazia lives in Mississauga, Ontario.