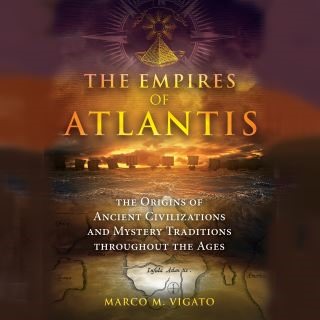 The Empires of Atlantis

The Origins of Ancient Civilizations and Mystery Traditions throughout the Ages

• Traces the course of Atlantean civilization through its three empires, as well as the colonies and outposts formed by its survivors in Egypt, Göbekli Tepe, India, Mesopotamia, the Mediterranean, and North and South America

Exploring more than 100,000 years of Earth’s history, Marco Vigato combines recent discoveries in the the fields of archaeology, geology, anthropology, and genetics with the mystery teachings of antiquity to investigate the true origins of civilization. Establishing the historical and geological reality of Atlantis stretching all the way back to 432,000 BCE, he traces the course of Atlantean civilization through its three empires, revealing how civilization rose and fell several times over this lengthy span of time.

The author shows that Atlantis did not vanish “in one terrible day and night” but survived in a variety of different forms well into the historical era. He reveals how the the first Atlantean civilization lasted from 432,000 to 35,335 BCE, the second one from 21,142 to 10,961 BCE, and the third Atlantis civilization--the one celebrated by Plato--collapsed in 9600 BCE, after the Younger Dryas cataclysm. The author examines the role of Atlantean survivors in restarting civilization in different parts of the world, from Göbekli Tepe and Egypt to India, Mesopotamia, and the Americas. He personally documents their colonies and outposts around the globe, offering unique views of the colossal network of pyramids, earthen mounds, and other megalithic monuments they le behind. He shows how these monuments testify to the survival of a sacred science of Atlantean origin, and he documents the survival of the primeval Atlantean tradition through various secret societies into the modern era.

Drawing on more than 500 ancient and modern sources and sharing never-before-seen photographs from his own personal exploration of hundreds of archaeological sites around the world, Vigato shows not only that Atlantis was real but that the whole world is now being called to become a New Atlantis and awaken into a new golden age.

Marco M. Vigato: Marco M. Vigatohas has dedicated the past 15 years to documenting the evidence of ancient advanced civilizations around the world. The author of several research papers, documentaries, and the popular blog Uncharted Ruins, he holds degrees from Harvard Business School and Bocconi University. A native of Italy, he lives in Mexico City.