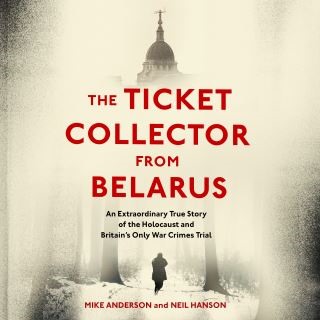 The Ticket Collector from Belarus

An Extraordinary True Story of Britain's Only War Crimes Trial

'Compelling' Daily Mail
'Engrossing' Independent
The UK's only war crimes trial took place in 1999 and had its origins in the horrors of the Holocaust, but only now in The Ticket Collector from Belarus? can the full story be told.

The Ticket Collector from Belarus tells the remarkable story of two interwoven journeys. Ben-Zion Blustein and Andrei Sawoniuk were childhood friends in 1930s Domachevo, a holiday and health resort in what is now Belarus. During the events that followed the Nazi invasion in 1941, they became the bitterest of enemies. After the war, Ben-Zion made his way to Israel, and ‘Andrusha the bastard’ to England, where he found work as a British Rail ticket collector in London.

They next confronted each other in the Old Bailey, over half a century later, where one was the principal prosecution witness, and the other charged with a fraction of the number of murders he was alleged to have committed. There was no physical evidence, just one man’s word against another, leaving the jury with a series of agonising dilemmas: Could any witness statement be trusted so long after the event? Was Andrusha a brutal killer, a hapless pawn or a scapegoat? And were his furious protests a sign of guilt or the justified anger of an innocent old man?

Mike Anderson was gripped by the story, and so began his quest to find the truth about this astonishing case and the people at its heart. As he discovered, it was even more remarkable than he could ever have imagined.

Mike Anderson:
Mike Anderson is a senior employee of one of the world’s oldest private banks. He considers himself fortunate to have stumbled across this extraordinary true story and has been relentless in his pursuit of the tale of Britain’s only successful war crimes prosecution and the parallel lives of Ben-Zion Blustein and Anthony Sawoniuk.
|||
Neil Hanson is the author of a dozen acclaimed works of narrative non-fiction, including The Unknown Soldier, The Confident Hope of a Miracle, The Custom of the Sea and The Dreadful Judgement. They have been hailed by critics around the world as ‘astonishing’, ‘brilliant’, ‘haunting’, ‘extraordinary’, ‘a triumph’ and ‘a masterpiece’, and compared by one to ‘Siegfried Sassoon, Robert Graves and a dozen other immortals’.