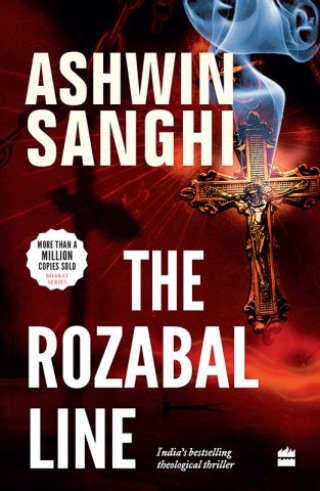 A cardboard box is found on a shelf of a London library where a copy of Mahabharata should have been. When the mystified librarian opens it, she screams before she falls unconscious to the floor. An elite group calling itself the Lashkar-e-Talatashar has scattered around the globe, the fate of its members curiously resembling that of Christ and his Apostles. Their agenda is Armageddon. In the labyrinthine recesses of the Vatican, a beautiful assassin swears she will eliminate all who do not believe in her twisted credo. In Tibet, Buddhist monks search for a reincarnation while in strife-torn Kashmir, a tomb called Rozabal holds the key to an ancient riddle. Father Vincent Sinclair, has disturbing visions of himself and of people familiar to him, except that they seem located in other ages. He goes to India to piece together the violent images burnt onto his mind. Shadowing his every move is a clandestine society, which would rather wipe out creation than allow an ancient secret to be disclosed.

Ashwin Sanghi is among India's highest-selling English fiction authors. He has written several bestsellers in the Bharat Series (The Rozabal Line, Chanakya's Chant, The Krishna Key, The Sialkot Saga, Keepers of the Kalachakra, The Vault of Vishnu) and two New York Times bestselling crime thrillers with James Patterson, Private India (sold in the US as City on Fire) and Private Delhi (sold in the US as Count to Ten). He has also co-authored several non-fiction titles in the 13 Steps Series on Luck, Wealth, Marks, Health and Parenting. Ashwin has been included by Forbes India in their Celebrity 100 and by The New Indian Express in their Culture Power List. He is a winner of the Crossword Popular Choice Award 2012, Atta Galatta Popular Choice Award 2018, WBR Iconic Achievers Award 2018, the Lit-O-Fest Literature Legend Award 2018 and the Kalinga Popular Choice Award 2021. He was educated at Cathedral and John Connon School, Mumbai, and St Xavier's College, Mumbai. He holds an MBA from Yale University. Ashwin lives in Mumbai with his wife, Anushika, and son, Raghuvir. You can connect with Ashwin via the following channels: