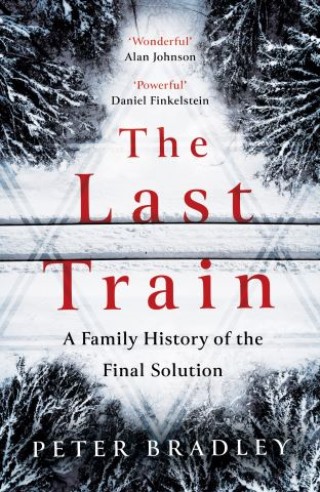 The Last Train: A Family History of the Final Solution

The profoundly moving and deeply intimate story of one Jewish family’s fate in the Holocaust, following the thread from Germany to Latvia and to Britain.

It was only by accident that Peter as a child discovered that his father, Fred Bradley, was in fact born Fritz Brandes. And it was only after his father’s death in 2004 that Peter was able to begin to piece together the family’s story and set out on the journey – literally and figuratively – that forms the basis of his book.

Peter’s family were German Jews. In 1938, his father was imprisoned in Buchenwald in the aftermath of Kristallnacht. He was released the following spring when he was granted a visa to settle temporarily in the UK. He arrived in London in May 1939, aged 24, penniless and alone. But when the Nazis invaded France and the Low Countries in May 1940, he was arrested by the British as an ‘enemy alien’ and shipped to an internment camp in Canada. His parents’ fate was to be very different: they were deported by train from their home in Bavaria to Latvia, to the Riga ghetto and nearby camps, where they were murdered.

Peter felt a growing need not only to find out what had happened, but also to try to understand why his grandparents’ fellow citizens had come to put them on that train. Of course antisemitism was at the root. But where did it come from? And why did it continue virtually unabated after WW2 despite such graphic evidence of the horrors it had caused? Why is it resurgent today?

Such apparently intractable questions led Peter to the forests of Latvia where his grandparents died and to dig deeply into the ancient roots of this prejudice. This book tells the story of what he learned.

Peter Bradley was the Labour MP for The Wrekin between 1997 and 2005. More recently, he co-founded and directed Speakers’ Corner Trust, a charity which promotes freedom of expression, open debate and active citizenship in the UK and developing democracies. He has written, usually on politics, for a wide range of publications, including The Times, The Guardian, The Independent, The New Statesman and The New European.