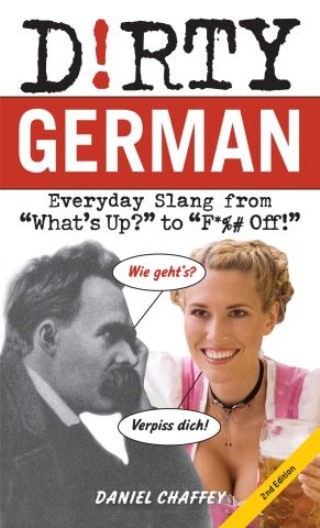 Learn the slang words, modern phrases, and curses they definitely never taught you in German class with this super-handy and hilariously improper English-German phrasebook.

You already know enough German to get by, but you want to be able to tell those inside jokes, greet your friends in a laid-back manner, and casually pick someone up at a bar.

From “what’s up?” to “Wanna go home with me?” Dirty German will teach you how to speak like you're a regular on the streets of Berlin. But you’ll also discover material that goes beyond a traditional phrasebook, including:

Next time you’re traveling to Germany, pick up this book, drop the textbook formality, and get dirty!

Daniel Chaffey: Daniel Chaffey is a writer, scholar, educator and eternal student of all things German. For the last twelve years, he has lived and worked in Germany, where he perfected his high German skills and learned to converse like a German sailor as a student, Fulbright Teaching Associate, translator and bartender. He holds an MA in German Studies and a teaching credential from Cal State Long Beach. He currently teaches German in Northern California, where he continues to work on other projects, including a lexicon of soldier slang from the Second World War.