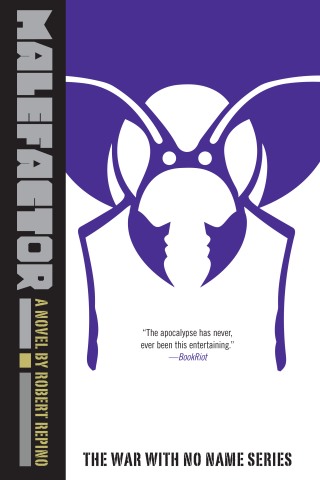 Robert Repino concludes the War with No Name series in an explosive final novel.

Over a decade has passed since the ant queen began her apocalyptic war with the humans. In the aftermath, she leaves behind a strange legacy: a race of uplifted animals, the queen’s conscripts in the war effort, now trying to make their way in the world they destroyed. While the conflict has left deep scars, it has also allowed both sides to demonstrate feats of courage and compassion that were never possible before. And now, after years of bloodshed, the survivors have a fleeting chance to build a lasting peace.

But peace always comes with a price. The holy city of Hosanna—where animals and humans form a joint government—finds itself surrounded by wolves who are determined to retake the land. A powerful matriarch has united the rival wolf packs, using a terrible power harnessed from the Queen herself.

Soon, the looming violence pulls in those who sought to escape. The war hero Mort(e) suspects a plot to destroy Hosanna from within, and recruits a team of unlikely allies to investigate. Falkirk, captain of the airship Vesuvius, must choose between treason and loyalty to save the city. And D’Arc, sailing aboard the al-Rihla, learns that the wolves may have triggered a new cycle of life for the Colony, bringing a final reckoning to animal and human alike. Once reunited, the three outcasts begin a journey into wolf territory to face the last remnant of the queen’s empire. But while destiny has drawn them together, it may destroy them as well, for even love, courage, and honor may not be enough to stop the forces of destruction set to be unleashed on the world.

Robert Repino: Robert Repino grew up in Drexel Hill, Pennsylvania. After serving in the Peace Corps, he earned an MFA in Creative Writing from Emerson College. His fiction includes short stories in The Literary Review and Hobart, as well as the middle grade series Spark and the League of Ursus. He lives in New York and works as an editor for Oxford University Press. Malefactor concludes the War with No Name series, and follows the novels D'Arc and Mort(e) and the novella Culdesac.