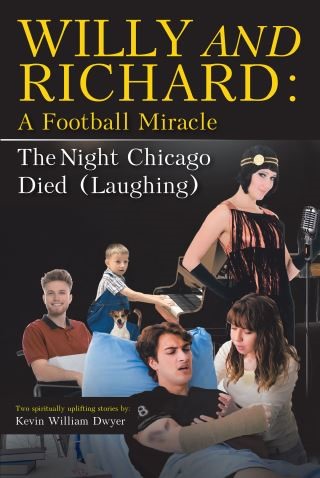 "A Football Miracle" is about a very gifted college senior quarterback, Willy Bateman, who has his sights on turning pro and following in his father's footsteps. However, Willy's younger brother, Richard, nineteen, is one of his teammates often criticized for his lack of effort and passion for the sport. Playing for the national championship, the biggest game of his life, Willy's sure touchdown pass on the last play of the game slips through Richard's fingers, costing them the title. Several nights later, while driving home from a party on a brutal winter's night, the boys get into an argument with Richard getting physical and causing Willy to lose control of their vehicle. While Willy's nonthrowing arm is severed from his body, the accident leaves Richard paralyzed. The brothers bitterly blame each other. In conclusion, "A Football Miracle" is about love, forgiveness, and perseverance. "The Night Chicago Died Laughing" is about a beautiful, talented twenty-one-year-old singer, Ginger Charmer, who was raised by her very loving and eccentric grandfather, once in vaudeville. Upon inheriting her great uncle's old, run-down saloon in Chicago, Ginger convinces her grandfather to move from their comfortable home in Buffalo in order to fulfill her dream of running her own nightclub. When they arrive, Ginger meets her struggling, unemployed dancer boyfriend, Charleston Charlie, who suggests she borrow from the town's most feared gangster, Doug the Thug, after telling him she didn't have enough money for the renovations. Barely tall as a yardstick that fuels him into being a bully, Ginger eventually learns Doug's bark is worse than his bite. But he becomes frustrated with Ginger when she makes little effort in paying him back because she's always buying new clothes, refusing to wear the same thing more than once. In spite him kidnapping her (she gets away), forgiving Ginger invites Doug into her home after the notorious Al Capone breaks out of prison and runs him out of town. Along with Ginger's and her grandfather's help, they send Capone and his goons running. While it's Ginger's compassion and understanding that transform Doug into a kinder person, she realizes she needs to be less materialistic and more responsible with her own debts.