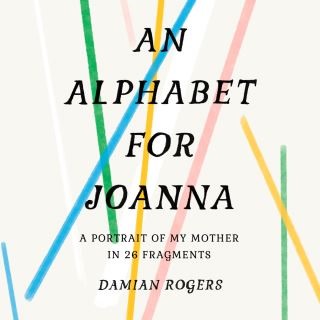 An Alphabet for Joanna

A Portrait of My Mother in 26 Fragments

A gripping memoir from acclaimed poet Damian Rogers about being raised by a loving but erratic single mother who is today diagnosed with a rare form of frontal-lobe dementia. In the vein of Plum Johnson's They Left Us Everything, Leanne Shapton's Swimming Studies, Jeannette Walls' The Glass Castle and Susannah Cahalan's Brain on Fire.

"Evocative, beautifully written, heartbreaking . . . of special interest to all whose loved ones suffer from dementia." --Margaret Atwood (on Twitter)

"An Alphabet for Joanna is a braid of tiny stories that weaves us into a nest of belonging despite circumstance and injury . . . A memoir of stunning thoughtfulness, Rogers presents us with a loving treatise on what it means to be human." - Leanne Betasamosake Simpson

Throughout her childhood in Detroit, Damian Rogers was never given a satisfactory account of the circumstances that led to her own birth. The "truth" behind the stories she was told by her mother--the free-spirited, beautiful and troubled Joanna--constantly shifted, and Damian was left only with fragments: her mom's trip to California in 1969 after finishing high school, a mysterious trauma and psychotic break, then a return to Detroit, pregnant. Now, as 40-something Damian struggles to cope with Joanna's early-onset dementia, she realizes she may never know the full story.

A riveting portrait of a time and place (the leafy suburbs of Detroit, Michigan and working class neighborhoods of Long Beach, California in the 1970s and 80s), An Alphabet for Joanna is also an unconventional mother-daughter saga, and a creative exploration of how memory shifts and shapes our most intimate relationships. Acclaimed poet Damian Rogers crafts a unique work that is both a moving memoir and a powerful philosophical reflection on how we build lives out of fragments of stories. And by tracing her mother's story into the present day she poignantly shows that even when memory fails, we can remain connected through a web of art, empathy, imagination and love.

Damian Rogers: DAMIAN ROGERS is the author of two acclaimed books of poetry: Dear Leader (2015), which was named one of the best books of 2015 by the CBC and the Globe and Mail, and was a finalist for the Ontario Trillium Poetry Prize; and Paper Radio (2009), which was shortlisted for the Pat Lowther Memorial Prize. She holds a graduate degree from the Bennington Writing Seminars in Bennington, Vermont, and has published work in many magazines and online journals, including Boston Review, Brick, The Walrus, Hazlitt, White Wall Review, Event, Four Way Review, Taddle Creek, Riddle Fence, Toronto Star, Maisonneuve, Salt Hill and more. Damian teaches creative writing at Ryerson University. She lives in Toronto.