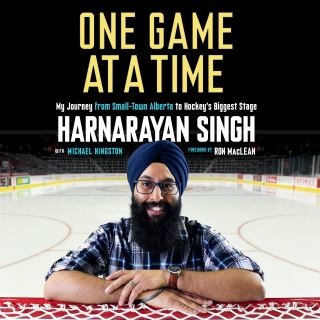 One Game at a Time

My Journey from Small-Town Alberta to Hockey's Biggest Stage

From the distinct and vibrant voice behind Hockey Night in Canada Punjabi comes the story of pursuing a dream and defying the odds, reminding us all of hockey's power to unite.

Ask a hockey fan if they have heard the wonderfully electric call of Nick Bonino's overtime-winning goal from the 2016 Stanley Cup Final and they will almost surely answer with a resounding yes! That's because video clips of the Hockey Night in Punjabi broadcast immediately went viral, amplifying the profile of Harnarayan Singh, the voice behind the call.

Growing up in small-town Alberta, Harnarayan was like many other kids who dreamed about a life within the sanctum of the game they idolized. There was only one small difference--he didn't look like any of the other kids. And when he sat down on Saturday nights to tune in to Hockey Night in Canada with the rest of the nation, he couldn't ignore the fact that the broadcasters or analysts didn't look like him either. Undeterred, Harnarayan worked his way from calling imaginary hockey games with his plastic toy microphone as a child, to funding secret flights from Calgary to Toronto every weekend in the early days of Hockey Night in Punjabi, to making history as the first Sikh to broadcast an NHL game in English.

Full of heart, humour, and bursting with personality (and maybe a few family prayers for Wayne Gretzky), One Game at a Time is the incredible and inspiring story of how Harnarayan Singh broke through the longstanding barriers and biases of the sport he loves. But more than that, Harnarayan blends his unabashed love of hockey with a refreshing and necessary positive message about what it means to be a Canadian in the world, making him one of the most influential ambassadors of the game today.

Harnarayan Singh: HARNARAYAN SINGH is a co-host and play-by-play announcer, having called over 700 NHL games for Hockey Night in Canada Punjabi, along with becoming a host in English with Sportsnet for select national games. Having previously worked for CBC and TSN, Harnarayan also produces a segment in Calgary called Flames TV Punjabi and serves on the Board of Directors for HEROS Hockey, a charity empowering marginalized youth through mentorship. In 2018, Harnarayan was the recipient of the Meritorious Service Medal by the Governor General of Canada for his contributions to Canadian society. He also serves as an ambassador for the NHL's Hockey Is For Everyone program and Chevrolet Canada's Good Deeds Cup. Follow him @IceSinghHNIC