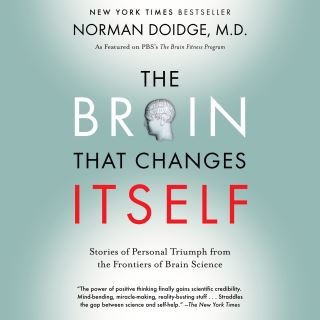 The Brain That Changes Itself

Stories of Personal Triumph from the Frontiers of Brain Science

An astonishing new science called neuroplasticity is overthrowing the centuries-old notion that the human brain is immutable. Psychiatrist and psychoanalyst, Norman Doidge, M.D., traveled the country to meet both the brilliant scientists championing neuroplasticity and the people whose lives they’ve transformed—people whose mental limitations or brain damage were seen as unalterable. We see a woman born with half a brain that rewired itself to work as a whole, blind people who learn to see, learning disorders cured, IQs raised, aging brains rejuvenated, stroke patients learning to speak, children with cerebral palsy learning to move with more grace, depression and anxiety disorders successfully treated, and lifelong character traits changed. Using these marvelous stories to probe mysteries of the body, emotion, love, sex, culture, and education, Dr. Doidge has written an immensely moving, inspiring book that will permanently alter the way we look at our brains, human nature, and human potential.

Norman Doidge: Norman Doidge, M.D., is a psychiatrist, psychoanalyst, and New York Times bestselling author. He is on the Research Faculty at Columbia University’s Center for Psychoanalytic Training and Research, in New York, and on the faculty at the University of Toronto’s Department of Psychiatry. He and his work have been profiled and cited in, among others, The New York Times, The Wall Street Journal, Newsweek, International Herald Tribune, The Washington Post, Scientific American Mind, Melbourne Age, The Guardian, The Harvard Review of Psychiatry, Psychology Today, O The Oprah Magazine, and the National Review.