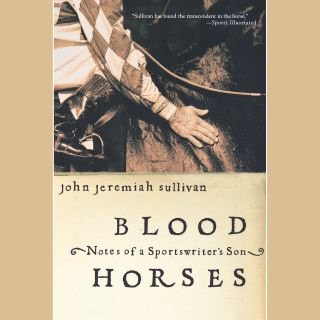 Notes of a Sportswriter's Son

"Sullivan has found the transcendent in the horse."--Sports Illustrated

Winner of a 2004 Whiting Writers' Award

One evening late in his life, veteran sportswriter Mike Sullivan was asked by his son what he remembered best from his three decades in the press box. The answer came as a surprise. "I was at Secretariat's Derby, in '73. That was ... just beauty, you know?"

John Jeremiah Sullivan didn't know, not really—but he spent two years finding out, journeying from prehistoric caves to the Kentucky Derby in pursuit of what Edwin Muir called "our long-lost archaic companionship" with the horse. The result—winner of a National Magazine Award and named a Book of the Year by The Economist magazine—is an unprecedented look at Equus caballus, incorporating elements of memoir and reportage.

In the words of the New York Review of Books, Blood Horses "reads like Moby-Dick as edited by F. Scott Fitzgerald . . . Sullivan is an original and greatly gifted writer."

John Jeremiah Sullivan: JOHN JEREMIAH SULLIVAN was born in Louisville, Kentucky, in 1974, and now lives in Wilmington, North Carolina, with his wife and two daughters. He was an editor at Harper's Magazine and a writer for GQ before becoming a contributing writer for The New York Times Magazine. He is currently the Southern Editor of The Paris Review.