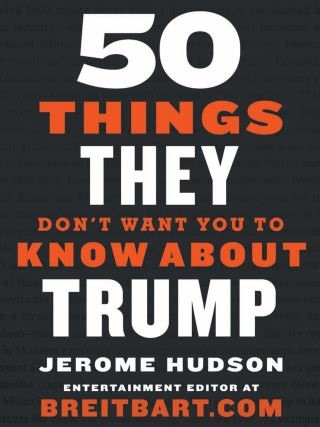 50 Things They Don't Want You to Know About Trump

Breitbart.com editor Jerome Hudson returns with even more red pills, facts, and statistics to counteract the lies and blind spots of the mainstream media.

Did you know Donald Trump has allocated more funding to historically black colleges and universities than any other president?

In 50 Things They Don’t Want You to Know About Trump, Jerome Hudson uncovers all the things Americans have not been told about our 45th president. We’re surrounded by supposed influencers shouting about the scandals that Americans care about the least, from TV talking heads to social media activists, from feckless Washington swamp monsters to candidates fighting for the soap box.

Your teachers, your politicians, and your local paper are not likely to ever tell you:

After finishing 50 Things They Don’t Want You to Know About Trump, you’ll be stunned at the many Trump accomplishments which just aren’t reported by the powers that be.

Jerome Hudson is the Entertainment Editor for Breitbart.com.