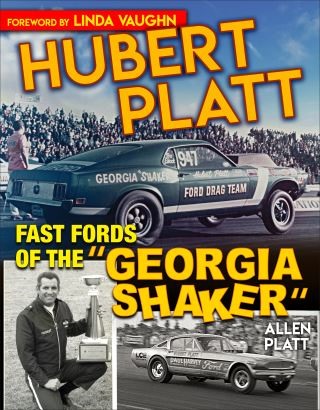 Webster's Dictionary lists the term showman as "a notably spectacular, dramatic, or effective performer." In the art of drag racing, Hubert Platt checked all boxes. Known as the "Georgia Shaker," Platt cut his motoring teeth on the long straightaways and twisty back roads of South Carolina while bootlegging moonshine. After a run-in with the law in 1958, Platt transferred his driving skills from illegal activity to sanctioned drag racing and began one of the most dominant runs in drag racing history until his retirement in 1977.

A 1986 NHRA Hall of Fame member, Platt's lasting legacy on the sport can‚Äôt be denied. Whether he was launching his Falcon with the door open, conducting a Ford Drag Team seminar, or posting low E.T. at the 1967 US Nationals in his Fairlane, Platt's imprint on drag racing was all-encompassing. His son and biggest fan, Allen Platt, shares his dad's iconic career in, Hubert Platt: Fast Fords of the "Georgia Shaker"!