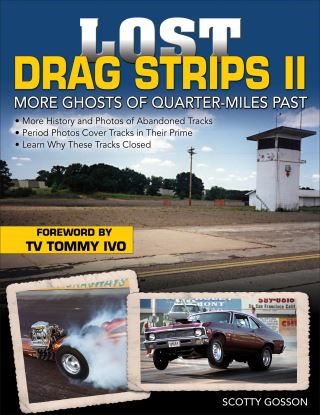 Even more forgotten drag racing facilities from the 1950s, 1960s, and 1970s are showcased in this sequel to the best-selling book Lost Drag Strips: Ghosts of Quarter-Miles Past.

Lost Drag Strips II: More Ghosts of Quarter-Miles Past picks up where the first volume left off, covering additional tracks with archival photos of racing in the tracks' heyday, the cars that ran there, and the tracks as they exist today. This volume also includes some of the tracks that survived, those that fought off the economic demons and the urban sprawl and continue to run today.

In the first volume, the author examined the birth of drag racing and its subsequent popularity that invaded every city and community across America. Unfortunately, after the initial explosion of popularity, it waned, and various drag strips closed for a myriad of reasons. Financial pressure for the real estate they occupied, suburban sprawl, and waning participation were all reasons for the change in fortunes for the small, and even not-so-small, racetracks. The first volume was great, but readers demanded more!

If you are an automotive history enthusiast, enjoyed Lost Drag Strips: Ghosts of Quarter-Miles Past, or are just a fan of racing in general, this is the perfect addition to your automotive library.