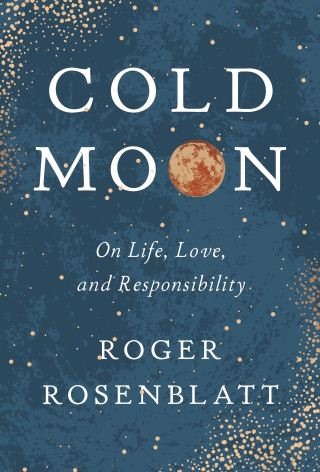 On Life, Love, and Responsibility

"A booster shot of wisdom when we need it most."—Alan Alda

"Cold Moon knocked me on my ass then held out its hand and hauled me back up, tossing me into the brawling fray, joyous and more hopeful than ever." —Paul Harding, Pulitzer-Prize-winning author of Tinkers

The Cold Moon occurs in late December, auguring the arrival of the winter solstice. Approaching the winter solstice of his own life, Roger Rosenblatt offers a book dedicated to the three most important lessons he has learned over his many years: an appreciation of being alive, a recognition of the gift and power of love, and the necessity of exercising responsibility toward one another. In a rough-and-tumble journey that moves like the sea, Rosenblatt rolls from elegy to comedy, distilling a lifetime of great tales and moments into a tonic for these perilous and fearful times. Cold Moon: a book to offer purpose, to focus the attention on life’s essentials, and to lift the spirit.​

Roger Rosenblatt: Roger Rosenblatt is the author of five New York Times Notable Books of the Year, four national bestsellers. and seven off-Broadway plays. His essays for Time magazine and the PBS NewsHour have won two George Polk Awards, the Peabody, and the Emmy, among others. In 2015, he won the Kenyon Review Award for Lifetime Literary Achievement. He held the Briggs-Copeland appointment in the teaching of writing at Harvard. He is Distinguished Professor of English and Writing at SUNY Stony Brook/Southampton.