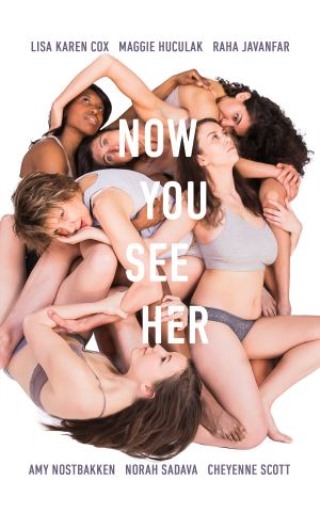 Now You See Her

Now You See Her named one of Toronto’s Top Ten Plays of 2018 by the Toronto Star.

They are the invisible, the vanishing, and the disappeared. In an insurrectionary outburst of original music, words, and movement, the six characters in Now You See Her explore some of the diverse ways women fade from sight in our culture. They sing, dance, and thrust themselves into the elements as they travel through the seasons of their lives. Their voices are defiant. Their question is simple: why and how do we allow our power to disappear without a fight?

Amy Nostbakken is an award-winning director, writer, performer, and composer. She is co-artistic director of the theatre company Quote Unquote Collective in Toronto and core member of Theatre Ad Infinitum in the UK. She has created and composed numerous productions including The Big Smoke (2011), Ballad of the Burning Star (2013), Bucket List (2016), and Mouthpiece (2015) – which she directed, co-wrote, composed, and performed. Mouthpiece was published by Coach House Books and Oberon UK, and continues to tour internationally. It has been adapted into a feature film directed by Patricia Rozema. Now You See Her, which Amy co-wrote, directed, composed, and performed, premiered in Toronto. Amy currently lives in Toronto.

Norah Sadava is an award-winning director, writer, and performer. She is co-artistic director of the theatre company Quote Unquote Collective in Toronto. Norah has created and performed numerous productions including Mouthpiece (Coach House Books), which she co-wrote and has performed internationally for the last four years. Mouthpiece continues to be produced internationally and was adapted into a feature film in collaboration with acclaimed Canadian director Patricia Rozema. Now You See Her, which Norah co-wrote, directed, and performed, premiered in Toronto in 2018 to critical acclaim. Norah is currently working on Quote Unquote’s next production Universal Child Care, set to premiere in 2021. A graduate of the Dell’Arte International School of Physical Theatre in California, Norah teaches theatre for both adults and young people. She lives in Toronto.

A graduate of Concordia University's Interdisciplinary Studies program, Lisa has had the pleasure of working for a wide variety of theatre companies (large and not so large) including: Quote Unquote Collective, Why Not Theatre, Spur-of-the-Moment Shakespeare, Headstrong, Dauntless City Theatre, Shakespeare in the Rough, Theatre Smash, Nightwood Theatre, National Arts Centre, the Stratford Festival of Canada, and the Royal Shakespeare Company. Often playing men and other mythical creatures, Lisa is also a teacher, choreographer, dancer, and director in addition to being an actor and mother. She relishes work that combines music, movement, and heightened language to create rawfully honest performative experiences.

|||Born in Iran, raised and living in Toronto, Raha Javanfar is a multifaceted artist. As lighting designer, she has worked on numerous productions in Toronto. As projections designer, she has toured the world with Tafelmusik over the course of a decade. A multi-instrumentalist, Raha performs regularly as frontwoman and singer/bassist of her blues/r&b band Bad Luck Woman & Her Misfortunes, and as a fiddle player in the Double Cuts, as well as in numerous other bands. Raha has sat on juries for the Dora Awards, FACTOR, and the OAC. She was co-recipient of the Siminovitch Prize, and is an active arts advocate and ambassador for Music Canada.|||

Cheyenne Scott is Coast Salish of the Saanich Nation and a theatre artist with a focus on developing new Canadian works. Through impactful personal expression and storytelling, her work is an exploration and celebration of her Indigenous heritage. She strives to inform settlers with truth and, more importantly, honour the people of her community by creating vibrant characters that are full of life and hope. Having learned theatre through a colonial process, she is working to indigenize her practice. She is invested in the powerful voice of the youth and supporting their growth.

Maggie Huculak has performed on Canadian stages for forty years. Cherished artistic collaborations include Necessary Angel (with Canadian writers Michael Ondaatje, Colleen Murphy, and John Mighton, and directors Richard Rose and Daniel Brooks), the late great Theatre Columbus (Martha Ross/Leah Cherniak), Soulpepper Theatre, Globe Theatre, and Quote Unquote Collective. She’s premiered scores of Canadian writers’ plays, and is the co-author of five collective creations: Mein, Hysterica, The Betrayal, Lonely Nights and Other Stories, and Now You See Her. She has worked extensively in film, television, and radio, and was the sole narrator of the epic CBC documentary series Canada: A People’s History. Maggie is a six-time Dora Award nominee, and is the recipient of a Dora Award and a Chalmers Award.