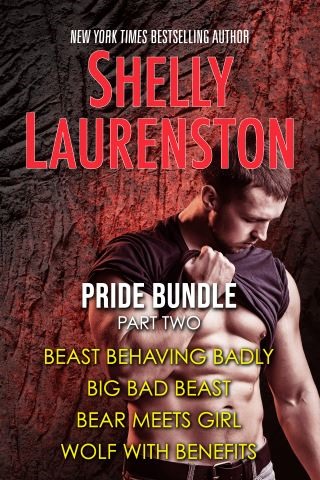 Once the hot-blooded shapeshifters in New York Times bestselling author Shelly Laurenston’s Pride series catch a scent of desire, the hunt is on, and every fang and claw are out and ready to take what truly belongs to them . . .

BEAST BEHAVING BADLY
Some men just have more to offer. Like Bo Novikov: he’s part polar bear, part lion, and pure alpha . . . Ten years after Blayne Thorpe first encountered Bo, she still can't get the smooth-talking shifter out of her head. Now he's shadowing her in New York, determined to protect her from stalkers who want to use her in shifter dogfights. She may insist Bo's nothing but a pain in her delectable behind, but polar bears have patience in spades. Soon she'll realize how good they can be together. And when she does, animal instinct tells him it'll be worth the wait . . .

BIG BAD BEAST
When it comes to following her instincts, former Marine Dee-Ann Smith never holds back. As a deadly member of a shifter protection group, she’ll do anything to prove one of her own kind is having hybrids captured for dogfights. But her too-cute, rich-boy boss Ric Van Holtz is making it real hard for Dee to keep her heart safe. He's wanted the fiercely independent she-wolf from day one, and he’s ready to show her what she needs is a wily, resourceful wolf who'll always have her back in a fight . . . and between the sheets.

BEAR MEETS GIRL
Lou Crushek is a reasonable, mellow, easygoing kind of guy. But once someone starts killing the scumbags he works so hard to bust, that really gets under his fur. Especially when that someone is Marcella Malone, a curvy she-tiger from an elite feline protection unit ready to body drop anyone who hunts her kind. Her impressive skill set is turning Crush's lone-bear world upside down—and bringing his passion out of hibernation . . .

WOLF WITH BENEFITS
Sure, Toni Jean-Louis Parker has to be the responsible oldest sister to a crazy-brilliant clan of jackal siblings. But now she's cutting loose for some hot, sweaty, no-commitments fun—and the sexy, slow-talking, swift-moving predator assigned to keep her family safe is just the right thing to shapeshift her love life into overdrive. Trouble is, Ricky Lee Reed's starting to get all obsessive wolf on her every time he looks in her direction . .

Praise for the Novels of Shelly Laurenston

“Shelly Laurenston’s shifter books are full of oddball characters, strong females with attitude and dialogue that can have you laughing out loud.”
—The Philadelphia Inquirer

“A little bit of everything . . . humor, passion, and suspense with a touch of paranormal.”
—FreshFiction

Shelly Laurenston: Shelly Laurenston is the New York Times and USA Today bestselling author of the Pride, Call of Crows, and The Honey Badger Chronicles, as well as winner of the RT Book Reviews Readers' Choice Award for her 2016 novel, The Undoing. When she’s not writing about sexy wolf, honey badger, lion, and other fang-filled predators, she's writing about sexy dragons as G.A. Aiken, the acclaimed and bestselling author of the Dragon Kin series. Originally from Long Island, she now lives on the West Coast and spends most of her time writing and making sure her rescued pit bull doesn’t love everyone into a coma. Please visit her online at www.ShellyLaurenston.com.