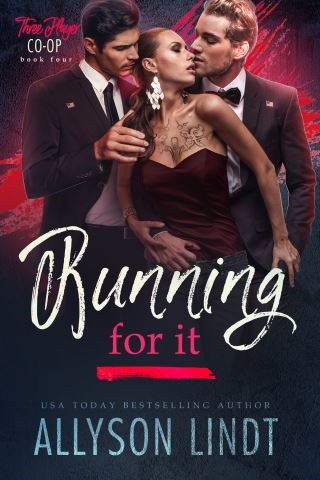 Violet
It's best to leave the past behind.

Ramsey's family is local royalty. Basically the Kennedys around here. And he doesn't have a problem using his money and connections to work the system.

It's the reason he and I didn't work out, years ago.

Then I make a mistake--I let a night of fun and relived memories lead to inviting him and his best friend-slash-campaign manager into my bed. With their smoldering looks and magic fingers, it's a mistake I'm tempted to repeat.

But I need to remember the people they are behind closed doors don’t mesh with their public faces. Because in Ramsey and Hunter's world, appearance is everything, even if hearts get stomped on in the process.

Two Plus One (Ménage Romance)
Their Nerd
Their Matchmaker

Null Equation (Dystopian Romance)
Over Exposed
Over Stimulated
Over Shared

Allyson Lindt: USA Today Bestselling Author Allyson Lindt is a full-time geek and a fuller-time author. She likes her stories with sweet geekiness and heavy spice, and loves a sexy happily-ever-after. Because cubicle dwellers need love too.

Her #GeekLove Contemporary and Ménage Romance books all take place in the same contemporary world. While each series stands on its own, readers' favorite characters, businesses, and places make appearances in other series.

You can connect with Allyson at her website: http://www.allysonlindt.co/

Read all of her books to see why A Lust for Reading said her books made them "smile and literally laugh out loud", Revenge of the Feels loved the sizzling attraction, ...danger, betrayal and humor" and readers call them "book nirvana","geek hotness", "sexy" and "fast paced".

In addition to her contemporary romance series - Love Games, Love Hack, and Game for Cookies (formerly For the Win) Allyson has written Hacking Wonderland (romantic suspense) and...

The Love Equation (formerly Your Ad Here), contemporary ménage romance)
1.The Rival and the Billionaire
2.The Geeks and the Socialite
3. The Second Chance and the Auctioneer
4. The Virgin and the Kingpin