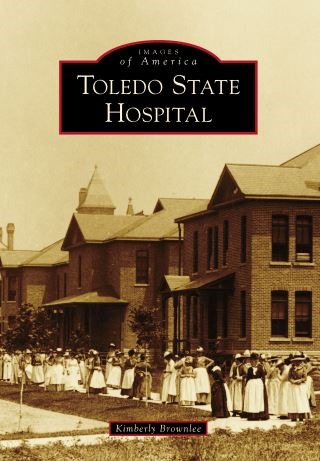 The Toledo State Hospital opened in 1888, and its design and healing approach were revolutionary for the time. First in the country built entirely on the "cottage model," its plan was intended to create a homelike atmosphere in a beautifully manicured landscape. Treatment methods were based on the "moral treatment" philosophy, the belief that calming surroundings with nutritious food, productive work, and diversion would help the disturbed mind to heal. Over the years, facilities were expanded to serve a burgeoning patient population, and medications and treatments evolved. In the 1950s, however, the population began a steady decline due to the advent of services in the community and to advances in psychotropic drugs. As the old buildings were emptied, they were demolished, and all were gone by 1981.

Kimberly Brownlee: Kimberly Brownlee is former manuscripts librarian and assistant university archivist at the Ward M. Canaday Center for Special Collections, University of Toledo. An alumna of the University of Toledo and Wayne State University's School of Library and Information Science, she also holds a graduate certificate in archival administration from Wayne State. She is a volunteer member of the Toledo State Hospital Cemetery Reclamation Committee and has served as a professional consultant for several private entities.