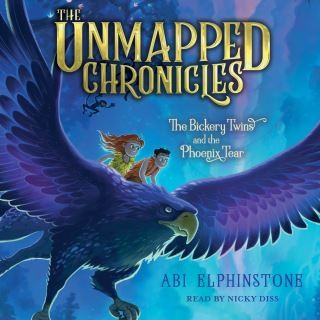 The Bickery Twins and the Phoenix Tear

Nevermoor meets Keeper of the Lost Cities in the second wondrous adventure in the Unmapped Chronicles fantasy series from bestselling author Abi Elphinstone.

Twins Fox and Fibber are riding on a train through Germany when it plunges into a dark tunnel—and emerges in Jungledrop, one of the Unmapped Kingdoms in charge of controlling the weather in their world. The land is beautiful but perilous, with grizzlebears and gobblequick trees. Together, they must brave the glow-in-the-dark rainforests to find the Forever Fern. Along the way, they learn to work together, see the beauty in the environment around them, and forgive themselves for past mistakes.

Abi Elphinstone: Abi Elphinstone grew up in Scotland where she spent most of her childhood building dens, hiding in tree houses, and running wild across highland glens. After being coaxed out of her treehouse, she studied English at Bristol University and then worked as a teacher in Africa, Berkshire, and London. She is the author of the Dreamsnatcher trilogy and the Unmapped Chronicles, among other books for young readers, and the editor of anthology Winter Magic. When she’s not writing, Abi volunteers for the children’s literacy charity Coram Beanstalk, speaks in schools, and travels the world looking for her next story. You can find more about Abi at AbiElphinstone.com or on Facebook at Facebook.com/Abi.Elphinstone.