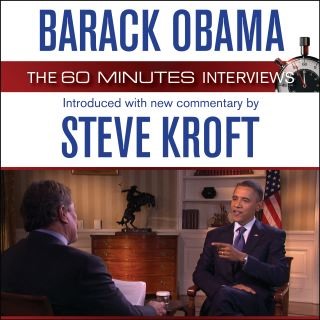 An audio-only collection published in partnership with CBS News’s 60 Minutes.

Barack Obama: The 60 Minutes Interviews offers an unprecedented glimpse into the Obama presidency, through a series of extended interviews presented with new commentary by award-winning 60 Minutes veteran Steve Kroft.

Kroft conducted more one-on-one television interviews with Barack Obama than any other journalist, from a January 2007 conversation on the eve of his unlikely candidacy to the 44th president’s final White House interview a decade later.

Collected here on audio, in chronological order, these conversations reveal Obama’s evolution from idealistic young senator to galvanizing candidate to two-term president. They also capture the development of the remarkable, decade-long dynamic between journalist and subject that created the atmosphere in which the first draft of history could be spoken aloud as it was unfolding.

In new material written and recorded for this program, Kroft places each of the seventeen segments in historical context, bringing listeners on a one-of-a-kind journey through the Obama presidency. To listen to these conversations is to relive the turning points of a tumultuous ten years. You’ll hear revelatory conversations in which Obama and Kroft are joined by then VP candidate Joe Biden, First Lady Michelle Obama, and outgoing Secretary of State Hillary Clinton. And you’ll sense the growing power of political forces that continue to shape our discourse today.

More than anything, these conversations return listeners to the company of the man who so memorably moved, challenged, and inspired the nation. At a moment when questions of leadership are in the forefront of our national conversation, his voice is truly one for our time.

Steve Kroft: Steve Kroft’s career began in the US Army as a correspondent-photographer for Pacific Stars and Stripes in Vietnam after his graduation from Syracuse University in 1967. He got his master’s degree from Columbia Journalism School. CBS News hired him in 1980 and he was named a correspondent in 1981. Kroft covered the civil war in El Salvador and the invasion of Grenada before he was posted to the London Bureau, where his reporting on European affairs and terrorism on the CBS Evening News caught the attention of executives. They brought him back in 1987 to be the principal correspondent on West 57th, a fledgling news magazine that became a stepping-stone to 60 Minutes. Kroft was 60 Minutes’ longest-tenured reporter, having reported nearly 500 stories for the news magazine, many among the broadcast’s biggest moments. Kroft is one of the most distinguished journalists of his generation. He has won five Peabody Awards, the Investigative Editors and Reporters Award (IRE), as well as the George Polk and JFK Journalism Awards. He’s also been honored with all of the major industry lifetime achievement awards: the Fred Friendly First Amendment Award, the Paul White Award from the RTDNA, and a Lifetime Achievement Emmy. Kroft retired from 60 Minutes in 2019.