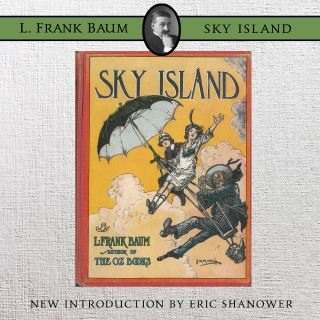 After an explanation of how the magic umbrella works, the two children, joined by Cap'n Bill, decide to take a trip to a nearby island; they call it "Sky island," because it looks like it's "halfway in the sky"—but the umbrella takes them to a different place entirely, a literal island in the sky.

L. Frank Baum: Lyman Frank Baum was born in Chittenango, New York, on May 15, 1856. Over the course of his life, Baum raised fancy poultry, sold fireworks, managed an opera house, opened a department store, and an edited a newspaper before finally turning to writing. In 1900, he published his best-known book The Wonderful Wizard of Oz. Eventually he wrote fifty-five novels, including thirteen Oz books, plus four “lost” novels, eighty-three short stories, more than two hundred poems, an unknown number of scripts, and many miscellaneous writings. Baum died on May 6, 1919.