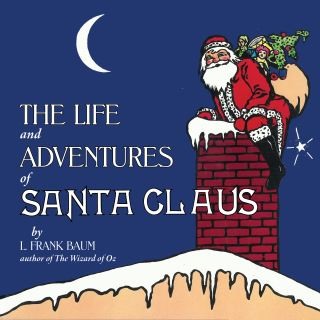 The Life and Adventures of Santa Claus

An imaginative work first published in 1902, L. Frank Baum’s “The Life and Adventures of Santa Claus” tells the story of Claus, an orphaned boy raised by various immortal creatures in an enchanted forest. When he reaches adulthood, Claus is told to live among mortals; he is disheartened initially by poverty, war, and other negative aspects of humanity. He becomes well-known for his kindness to children, and this enthusiasm leads to the invention of the first toys. Claus eventually makes it his life’s mission to bring joy to children, and this unfolds into an entertaining explanation of many Christmas traditions, including the hanging of stockings, Christmas trees, and gift-giving. After a lifetime of generosity the immortal creatures who raised him must consider whether Claus is worthy of immortality so that he may continue to bring joy into the lives of children. “The Life and Adventures of Santa Claus” illustrates the depth of Baum’s skill as an author of children’s literature.

L. Frank Baum: Lyman Frank Baum was born in Chittenango, New York, on May 15, 1856. Over the course of his life, Baum raised fancy poultry, sold fireworks, managed an opera house, opened a department store, and an edited a newspaper before finally turning to writing. In 1900, he published his best known book The Wonderful Wizard of Oz. Eventually he wrote fifty-five novels, including thirteen Oz books, plus four “lost” novels, eighty-three short stories, more than two hundred poems, an unknown number of scripts, and many miscellaneous writings. Baum died on May 6, 1919. He is buried in the Forest Lawn Memorial Park Cemetery, in Glendale, California.