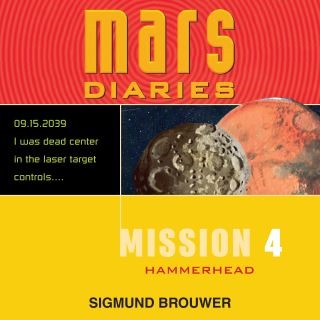 A deadly comet catapults toward Mars. Only one thing can break up the comet before it does damage: the new Hammerhead torpedo. Tyce Sanders only has two weeks to master it . . . and someone's trying to stop him. In this exciting, fast-paced series that even reluctant readers will love, Tyce not only uncovers this mystery but also learns more about the power of God's love.

Sigmund Brouwer: SIGMUND BROUWER grew up in Red Deer, Alberta, Canada, and developed an early interest in sports like hockey, racquetball, and biking. His poor performance in high school English classes led him to receive a degree in commerce from Calvin College in Grand Rapids, Michigan, and not to pursue writing. When a professor in his undergraduate English course encouraged him to write, and he eventually received a degree in journalism from Carleton College in Ottawa. After publishing several articles for U.S. and Canadian magazines, he turned to writing books for kids reluctant to read.
Sigmund is married to Christian recording artist Cindy Morgan; the couple has two daughters. Spends time between family homes in Red Deer and Nashville.