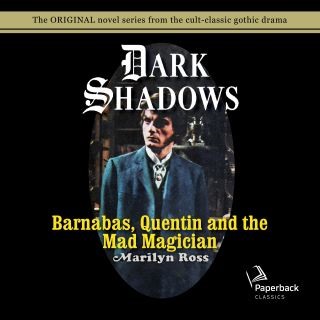 Barnabas, Quentin and the Mad Magician

When Cabrini, the world famous illusionist, comes to Collinwood, Carolyn Stoddard and her friend Beth Mayberry hope to work as his assistants. But suddenly, Carolyn’s anticipation changes to fear. Cabrini turns out to be a frightening figure, shrouded in mystery. Carolyn is certain his hypnotic eyes have pierced the soul of Beth Mayberry, making her a slave to the satanic rites he has planned.

Barnabas offers to help, but he is already under police suspicion.

News of ghastly murders in the region add to Carolyn’s terror—the victims’ throats have been ripped open. Everyone suspects Quentin Collins. And somewhere in the shadows Cabrini waits and weaves a spell…

Marilyn Ross: Marilyn Ross is the pseudonym for William Edward Daniel “W.E.D.” Ross (November 16, 1912 - November 1, 1995) was a Canadian actor, playwright and bestselling writer of more than 300 novels in a variety of genres. He was known for the speed of his writing and was by some estimates the most prolific Canadian author ever, though he did not take up fiction until middle age.

He wrote popular romances and gothic fiction as W. E. D. Ross and Dan Ross and under a variety of mostly female pseudonyms. As Marilyn Ross, he wrote popular gothic fiction including a series of novels about the tormented vampire, Barnabas Collins, based on the American TV series Dark Shadows (1966–71). His second wife, Marilyn, served as first reader of his works, and "Marilyn Ross" was one of his favorite pseudonyms.