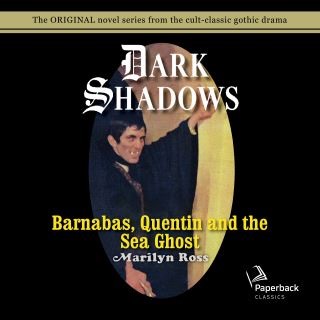 Barnabas, Quentin and the Sea Ghost

Centuries ago, Jenny Swift ruled her cutthroat crew of pirates with a blacksnake whip. Now, legend says, her ghost still guards the treasure ship where it sank in Collinsport Cove, meting out death to those rash enough to seek her gold. But Norah Bliss and her father, both salvage experts, are skeptical. Invited to Collinwood to recover the treasure, they accept eagerly.

At Collinwood, Norah finds herself in a different, more menacing world. Despite hints that Barnabas Collins is a vampire, she falls in love with him.

Then suddenly, Jenny’s ghost stalks her. Is Norah too, slated for death? Or will Barnabas be able to save her from the deadly blacksnake whip?

Marilyn Ross: Marilyn Ross is the pseudonym for William Edward Daniel “W.E.D.” Ross (November 16, 1912 - November 1, 1995) was a Canadian actor, playwright and bestselling writer of more than 300 novels in a variety of genres. He was known for the speed of his writing and was by some estimates the most prolific Canadian author ever, though he did not take up fiction until middle age.

He wrote popular romances and gothic fiction as W. E. D. Ross and Dan Ross and under a variety of mostly female pseudonyms. As Marilyn Ross, he wrote popular gothic fiction including a series of novels about the tormented vampire, Barnabas Collins, based on the American TV series Dark Shadows (1966–71). His second wife, Marilyn, served as first reader of his works, and "Marilyn Ross" was one of his favorite pseudonyms.