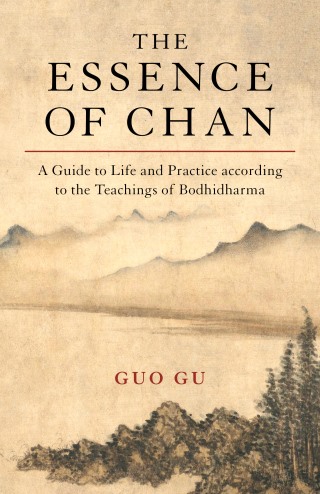 The Essence of Chan

Clear and illuminating commentary on one of Bodhidharma's most important texts, designed to help Chan practitioners apply timeless and essential advice to their practice.

Legend has it that more than a thousand years ago an Indian Buddhist monk named Bodhidharma arrived in China. His approach to teaching was unlike that of any of the Buddhist missionaries who had come to China before him. He confounded the emperor with cryptic dialogues, traveled the country, lived in a cave in the mountains, and eventually paved the way for a unique and illuminating approach to Buddhist teachings that would later spread across the whole of East Asia in the form of Chan--later to be known as Seon in Korean, Thien in Vietnamese, and Zen in Japanese.

This book, a translation and commentary on one of Bodhidharma's most important texts, explores Bodhidharma's revolutionary teachings in English. Guo Gu weaves his commentary through modern and relatable contexts, showing that this centuries-old wisdom is just as crucial for life now as it was when it first came to be. Masterfully translated and accompanied by helpful insights to supplement daily practice, The Essence of Chan is the perfect guide for those new to Chan, those returning, or those who have been practicing for years.

Guo Gu: GUO GU (Dr. Jimmy Yu) is one of the late Master Sheng Yen's (1931-2009) closest and most senior students. He was the guiding teacher for the Western Dharma Teachers Training course in the Dharma Drum Lineage and is the founder and guiding Chan teacher of the Tallahassee Chan Center (www.tallahasseechan.com). He is also a professor of Buddhism and East Asian religions at Florida State University, Tallahassee.