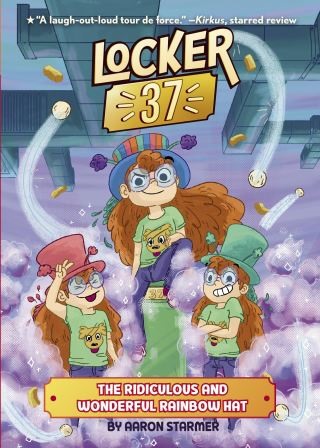 The Ridiculous and Wonderful Rainbow Hat #3

Hidden away at Hopewell Elementary School is a magical locker that always delivers a solution to your problems--just not quite in the way you might expect.

Locker 37 at Hopewell Elementary has been helping fourth graders solve their problems for as long as anyone can remember. So when Riley Zimmerman needs help pulling off the most ridiculous and wonderful prank the school has ever seen, the magical Locker 37 provides her with an equally ridiculous and wonderful rainbow hat that can clone anything that wears it. But will a group of clones, an untrustworthy bully, and 10,000 Ping-Pong balls be enough to help Riley pull off the most legendary prank in Hopewell's history?

Aaron Starmer: Aaron Starmer was born in northern California and raised in the suburbs of Syracuse, New York. Before pursuing writing full-time, he worked in New York City for over ten years as an editor for a travel bookseller and as an operations director for an African safari company. His middle grade and young adult novels have been translated into multiple languages and have appeared on best of the year lists from Time magazine, the Wall Street Journal, New York Public Library, YALSA, Bank Street College of Education, Chicago Public Library, and School Library Journal. His latest novel, Spontaneous, is in development as a film. He lives in Vermont with his wife and two daughters.