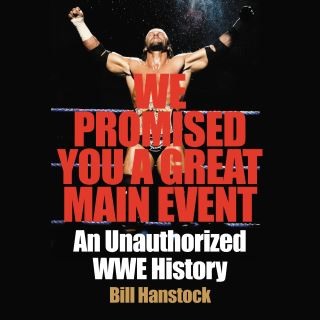 We Promised You a Great Main Event

The astounding and entertaining story of the biggest company in pro wrestling—WWE—World Wrestling Entertainment, told in full for the first time.

Spectacle and scandal, heartbreak and triumph—professional wrestling has it all: glamorous, world-famous stars. Riveting drama. Breathtaking physicality. Feuds and betrayals. Heroes and heels. Scripted battles and amazing surprises. Pro wrestling is the sport that everyone knows—and no one cares—is pure, manufactured entertainment.

What Vince McMahon has built with World Wrestling Entertainment is extraordinary. Today, WWE is a multi-billion-dollar business that broadcasts over ten hours of original programming to over six million fans globally every week. Over the course of more than eight decades in the professional wrestling business, the McMahon family has created a near-monopoly in the industry.

Yet despite this success, no one has told the fascinating and enthralling story of WWE in all its complexity. No one before has taken a complete look at its entire history—the good, the bad, the ugly, and the unexpected. For all its achievements, WWE is a company that has seen its share of crime and tragedy, including rampant early wrestler deaths, suicides and murders, sexual harassment, union busting, assault, steroid abuse, and human trafficking.

We Promised You a Great Main Event is the story of the McMahon family and WWE’s unprecedented rise. Drawing on a decade of covering wrestling, Bill Hanstock synthesizes insights from historians, journalists, and industry insiders with his own knowledge and deep research to produce the most accurate and entertaining history of the WWE available. Full of amazing characters and astonishing stories from the ring to corporate boardrooms, it is a story as audacious, shocking, hilarious, and sensational as any WWE spectacle.

Bill Hanstock is an Emmy-winning producer, screenwriter, editor and journalist. He has covered and interviewed countless WWE and independent wrestling personalities and events for SB Nation, has contributed to Polygon, The Athletic, and Inked magazine, and has penned nearly a dozen stories for the official WWE comic book. He lives in Los Angeles with his wife, son, and two cats.