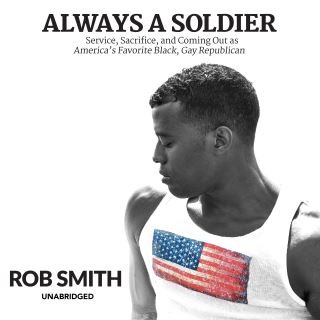 Moonlight meets American Sniper in this groundbreaking memoir and political commentary from a bold new voice in American politics. Before he became a war veteran and political analyst, he was a young black man who enlisted in the US Army right out of high school, survived the notoriously brutal infantry basic training, and served while remaining a closeted gay man to all but a few of his colleagues. At his first duty station, he finds himself in dangerous territory when the United States declares war on Iraq; in fact, his unit was one of the first called in after the initial invasion.

Rob’s experience offers a ground-level view of life on the front lines in the United States Army in an unforgettable coming-of-age story with a military twist. In addition to his memoir, Always a Soldier highlights his thoughts on current hot-button political topics like the new crop of Black Republicans and the escalating tactics of the LGBTQ community, announcing him as a voice in American politics that will be heard for years to come.

A decorated Iraq War Veteran, Rob Smith served for five years in the United States Army, including two tours in the Middle East. During Operation Iraqi Freedom, he was awarded the Army Commendation Medal and the Combat Infantry Badge.

An activist in the movement to repeal the ‘Don’t Ask, Don’t Tell’ law which barred open service by gay and lesbian soldiers, he was the subject of a 2018 Daily Mail profile in which he “came out” as a conservative in response to the “outrage culture” of the left.

As a political commentator, he has been seen on Fox News, NBC News, CNN, HLN, and more. He has spoken about politics and current events at Yale University, Google, Deutsche Bank, Vanderbilt University, and dozens of other colleges, universities, and companies across America.

Based in New York City, he holds a Master’s Degree from Columbia University.