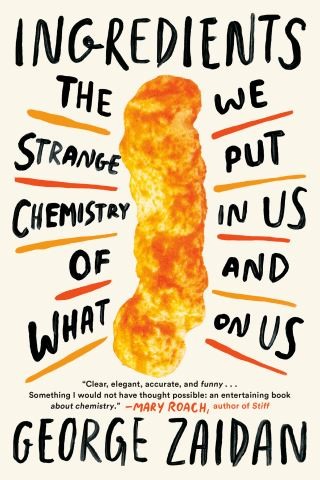 Cheese puffs. Coffee. Sunscreen. Vapes. George Zaidan reveals what will kill you, what won’t, and why—explained with high-octane hilarity, hysterical hijinks, and other things that don’t begin with the letter H.

INGREDIENTS offers the perspective of a chemist on the stuff we eat, drink, inhale, and smear on ourselves. Apart from the burning question of whether you should eat those Cheetos, Zaidan explores a range of topics. Here’s a helpful guide:

Stuff in this book:
- How bad is processed food? How sure are we?
- Is sunscreen safe? Should you use it?
- Is coffee good or bad for you?
- What’s your disease horoscope?
- What is that public pool smell made of?
- What happens when you overdose on fentanyl in the sun?
- What do cassava plants and Soviet spies have in common?
- When will you die?

Zaidan, an MIT-trained chemist who cohosted CNBC’s hit Make Me a Millionaire Inventor and wrote and voiced several TED-Ed viral videos, makes chemistry more fun than Hogwarts as he reveals exactly what science can (and can’t) tell us about the packaged ingredients sold to us every day. Sugar, spinach, formaldehyde, cyanide, the ingredients of life and death, and how we know if something is good or bad for us—as well as the genius of aphids and their butts—are all discussed in exquisite detail at breakneck speed.

George Zaidan: George Zaidan is a science communicator, television and web host, and producer. He created National Geographic’s webseries Ingredients, and he cowrote and directed MIT’s webseries Science Out Loud. His work has been featured in The New York Times, Forbes, The Boston Globe, National Geographic Magazine, NPR’s The Salt, NBC’s Cosmic Log, Science, Business Insider, and Gizmodo. He is currently executive producer at the American Chemical Society. Ingredients is his first book.