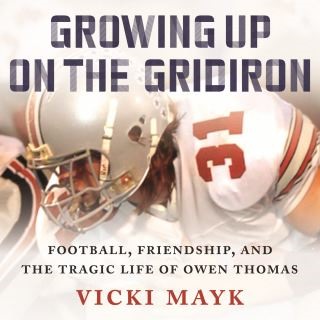 Growing Up on the Gridiron

Football, Friendship, and the Tragic Life of Owen Thomas

Explores the experience of one young man and the concerns about CTE he helped to illuminate, and the cultural allure of football in America that keeps boys trying to make the team despite the dangers

Award-winning journalist Vicki Mayk raises a critical question for football players and their communities: does loving a sport justify risking your life? This is the insightful and deeply human story of Owen Thomas—a star football player at Penn, who took his own life when he was 21, the result of the pain and anguish caused by chronic traumatic encephalopathy (CTE).

It was Owen’s landmark case which demonstrated that a player didn’t need years of head bashing in the NFL, or even multiple sustained brain concussions, to cause the mind-altering, life-threatening, degenerative disease known as CTE. And Owen’s case could not have come to light without Dr. Ann McKee, the neuropathologist who bucked conventional wisdom, and the football establishment, as she examined Owen’s brain and its larger significance, building an ever-stronger case that said, at the very least, football should not be played by children under the age of 14.

With its focus on a single life and the community touched by it—Owen’s family, his teammates and friends, his teachers and coaches, and, later, Dr. McKee—Growing Up on the Gridiron explores the place of football in our lives. It doesn’t make a heavy-handed argument to abandon the sport. Rather, it explores why football matters so deeply to many young men, and why they continue to take risks despite the evidence of serious, long-term harm.

Vicki Mayk: A former reporter for the Pittsburgh Post-Gazette, Vicki Mayk has enjoyed a 35-year career in journalism and public relations. Her love affair with football began at the age of nine, when her father first took her to a Steelers game. Connect with her at vickimayk.com and follow her on Twitter (@VickiMayk).