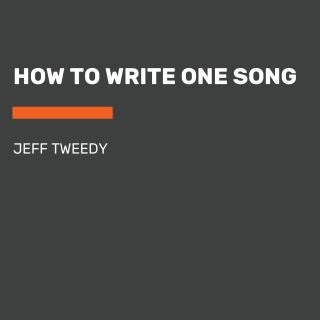 How to Write One Song

Loving the Things We Create and How They Love Us Back

There are few creative acts more mysterious and magical than writing a song. But what if the goal wasn't so mysterious and was actually achievable for anyone who wants to experience more magic and creativity in their life? That's something that anyone will be inspired to do after reading Jeff Tweedy's How to Write One Song.

Why one song? Because the difference between one song and many songs isn't a cute semantic trick—it's an important distinction that can simplify a notoriously confusing art form. The idea of becoming a capital-S songwriter can seem daunting, but approached as a focused, self-contained event, the mystery and fear subsides, and songwriting becomes an exciting pursuit.

And then there is the energizing, nourishing creativity that can open up. How to Write One Song brings readers into the intimate process of writing one song—lyrics, music, and putting it all together—and accesses the deep sense of wonder that remains at the heart of this curious, yet incredibly fulfilling, artistic act. But it’s equally about the importance of making creativity part of your life every day, and of experiencing the hope, inspiration, and joy available to anyone who’s willing to get started.

Jeff Tweedy: As the founding member and leader of the Grammy Award–winning American rock band Wilco, and before that the cofounder of the alt‐country band Uncle Tupelo, Jeff Tweedy is one of contemporary music’s most accomplished songwriters, musicians, and performers. Jeff has released two solo albums, written original songs for eleven Wilco albums, and is the author of the New York Times bestseller Let's Go (So We Can Get Back): A Memoir of Recording and Discording with Wilco, Etc. He lives in Chicago with his family.