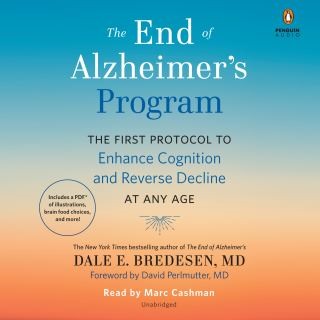 The End of Alzheimer's Program

The New York Times Best Selling author of The End of Alzheimer's lays out a specific plan to help everyone prevent and reverse cognitive decline or simply maximize brainpower.

In The End of Alzheimer's Dale Bredesen laid out the science behind his revolutionary new program that is the first to both prevent and reverse symptoms of Alzheimer's disease. Now he lays out the detailed program he uses with his own patients. Accessible and detailed, it can be tailored to anyone's needs and will enhance cognitive ability at any age.

What we call Alzheimer's disease is actually a protective response to a wide variety of insults to the brain: inflammation, insulin resistance, toxins, infections, and inadequate levels of nutrients, hormones, and growth factors. Bredesen starts by having us figure out which of these insults we need to address and continues by laying out a personalized lifestyle plan. Focusing on the Ketoflex 12/3 Diet, which triggers ketosis and lets the brain restore itself with a minimum 12-hour fast, Dr. Bredesen drills down on restorative sleep, targeted supplementation, exercise, and brain training. He also examines the tricky question of toxic exposure and provides workarounds for many difficult problems. The takeaway is that we do not need to do the program perfectly but will see tremendous results if we can do it well enough.

With inspiring stories from patients who have reversed cognitive decline and are now thriving, this book shifts the treatment paradigm and offers a new and effective way to enhance cognition as well as unprecedented hope to sufferers of this now no longer deadly disease.

Dale Bredesen: Dale E. Bredesen, MD, is internationally recognized as an expert in the mechanisms of neurodegenerative diseases such as Alzheimer's disease, and the author of the New York Times bestseller The End of Alzheimer's (Avery, 2017). He held faculty positions at UCSF, UCLA, and the University of California, San Diego, and directed the Program on Aging at the Burnham Institute before coming to the Buck Institute in 1998 as its founding president and CEO. He is currently a professor at UCLA.