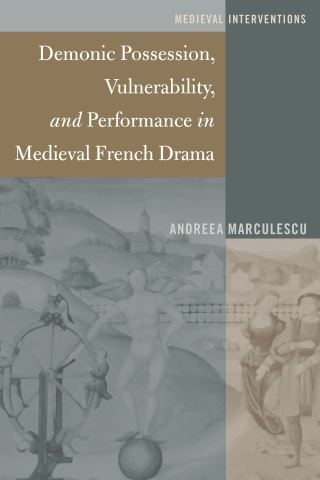 Just like the modern hysteric, a figure that catalyzes clinical vocabularies confirming medieval theological anxieties, the demoniac has been considered an "anomalous" and "abnormal" manifestation of womanhood. Incapable of self-governance, both linguistic and corporeal, the medieval possessed is placed in the category of the pathological. The symptoms of possession are part of a multilayered discourse coined by medieval theologians, authors of exempla, hagiographers, and natural philosophers. The subjectivity of the demoniac becomes, thus, a fetishistic construction which allows medieval male intellectuals to ponder questions about demons, the supernatural, and the human body. Demonic Possession, Vulnerability, and Performance in Medieval French Drama advocates for an affective and ethical framework of reading the vocabularies of possession in which the demoniac’s convulsions, contortions, shrieks of pain, and snapshots of disarticulated language are not conceptualized as "pathological" but as a model of intercorporeality built around modalities of sensuous exchange between the bodies of both the possessed and of those whom she comes in contact with. Can we think of a corporeal agency of the "anomalous" body of the possessed independent of reason and articulated language? What happens when such distorted bodies enter zones of visual, haptic, and aural contact with abled-bodied individuals? Can possession be considered as a producer of a sensuous type of knowledge that alters the way sovereign subjects perceive themselves? Taking as primary sources a series of late-medieval French Passion Plays and hagiographical plays authored by poetic and religious figures such as Arnoul Gréban, André de la Vigne, Eustache Mercadé, and Jean Michel, this book argues that the lyrical capaciousness of the plays as forms of narrativized poetics allows us to understand demonic possession as a series of bodily narratives of pain, of healing, of witnessing, and, ultimately, of vulnerability.

Andreea Marculescu is Lecturer in Women’s and Gender Studies at the University of Oklahoma. She earned her Ph.D. from Johns Hopkins University, and from 2012–2014 was an ACLS New Faculty Fellow at Harvard University. Marculescu is a co-editor of Affective and Emotional Economies in Medieval and Early-Modern Europe (2017). She has published articles in Critique, Mediaevalia, Literature Compass and other collected volumes on the interconnection between medieval theater and the larger fields of medieval demonology.