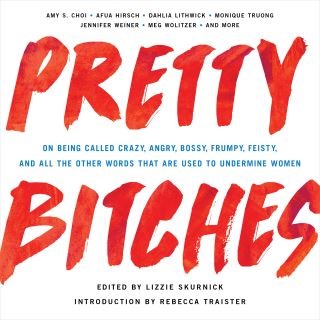 On Being Called Crazy, Angry, Bossy, Frumpy, Feisty, and All the Other Words That Are Used to Undermine Women

These empowering essays from leading women writers examine the power of the gendered language that is used to diminish women -- and imagine a more liberated world.
Words matter. They wound, they inflate, they define, they demean. They have nuance and power. "Effortless," "Sassy," "Ambitious," "Aggressive": What subtle digs and sneaky implications are conveyed when women are described with words like these? Words are made into weapons, warnings, praise, and blame, bearing an outsized influence on women's lives -- to say nothing of our moods.

No one knows this better than Lizzie Skurnick, writer of the New York Times' column "That Should be A Word"and a veritable queen of cultural coinage. And in Pretty Bitches, Skurnick has rounded up a group of powerhouse women writers to take on the hidden meanings of these words, and how they can limit our worlds -- or liberate them.

From Laura Lipmann and Meg Wolizer to Jennifer Weiner and Rebecca Traister, each writer uses her word as a vehicle for memoir, cultural commentary, critique, or all three. Spanning the street, the bedroom, the voting booth, and the workplace, these simple words have huge stories behind them -- stories it's time to examine, re-imagine, and change.

Lizzie Skurnick: Lizzie Skurnick is the creator of the long-running New York Times Magazine word-coinage column "That Should Be a Word." Her coinages have been featured in Entertainment Weekly, Slate, The Atlantic Monthly, Entertainment Weekly, on NPR's Weekend Edition, and more. She served a term as Vice President of the National Book Critics Circle, and has been a judge for the LA Times book prize and the PEN Book awards. A frequent contributor to The New York Times, NPR, Elle, Jezebel, and many other publications, she teaches at NYU. She lives in New York City.