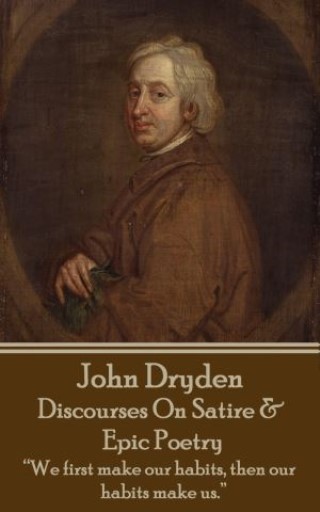 John Dryden was born on the 19th August 1631 in the village rectory of Aldwincle near Thrapston in Northamptonshire. Over the course of his career he made an immense contribution to literary life, so much so that the Restoration Age is also known as the Age Of Dryden. He was educated at Westminster and Trinity College Cambridge. In 1654 he graduated from Trinity but a short while later his Father died leaving him a little land and with it an income but unfortunately not enough to live on. He returned to London during the Protectorate and at Cromwell’s funeral on November 23rd 1658 he walked in a procession with the Puritan Poets. That same year he published his first major poem, Heroique Stanzas (1658), a restrained eulogy on Cromwell's death. In 1660 he celebrated the Restoration of the monarchy and the return of Charles II with Astraea Redux, an authentic royalist panegyric. In this work the interregnum is a time of anarchy, and Charles is seen as the restorer of peace and order. With this Dryden established himself as the leading poet of the day and with it came his allegiance to the new government. On December 1st 1663 he married Lady Elizabeth Howard who was to bear him three sons. He also began to write plays now that theatres had re-opened after the Puritan ban. In 1665 the Great Plague of London ensured that all London theatres were closed again. Dryden retreated to Wiltshire. The next year the Great Fire of London swept through London. In 1667, he published Annus Mirabilis, a lengthy historical poem which described the events of 1666; the English defeat of the Dutch naval fleet and the Great Fire of London. It was a modern epic in pentameter quatrains that established him as the preeminent poet of his generation. By 1668 he was the Poet Laureate and had also contracted to write 3 plays a year for the King’s Company. This was for many years to now become the main source of his income and of course his Restoration Comedies are almost without peer. Dryden’s career remains a glorious example of English culture and for many he is as revered as Shakespeare. Dryden died on 12 May 1700, and was initially buried in St. Anne's cemetery in Soho, before being exhumed and reburied in Westminster Abbey ten days later